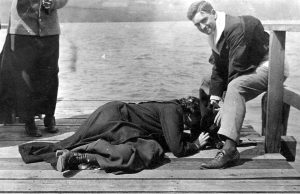 The Post Family’s relationship with Owasco Lake goes back to 1796, when William Post, at the request of his father, Christopher Post from Sommerset County, New Jersey, arrived to examine lot 91 in what is now Fleming.  Christopher subsequently purchased 471 acres, south of what is now Stone School Road, and bordering the Wyckoff property to the north.  The Peterson family, with whom Christopher and his family travelled from Sommerset County, settled north of the Posts.  These two families were related through marriage.  The original Post farm was located near the current location of Chantelle Marie.  Allen Post and his wife, Frances Yantch Post, were the last Post descendants to farm the land on Westlake Road.  Allen was a direct descendent of Christopher Post.

Over the years, the Post homestead existed in harmony with Lake Owasco, providing both sustenance and recreation to generations of their descendants.  In 1868, the Southern Central Railroad Company obtained a Right of Way, allowing its tracks to cross through the property.

In 1883, Justus Allen Post, Christopher’s great-grandson, moved his branch of the Posts to a farm in Scipio, just south of Wyckoff Station, maintaining the family tradition as farmers.  Justus’ grandson, Ray Post raised his family on the Fleming-Scipio Townline Road, just around the block from his childhood home on Wyckoff Road.  The Wyckoff farm is currently owned by one of Ray’s sons, and his family. Other descendants of Justus Allen also live on Wyckoff Road, on land that was once part of the farm that he, and subsequently his son Otto, owned.

Although raised on the Scipio farm on Wyckoff Road, Allen Post, Ray’s oldest brother, acquired part of the original farm on Westlake Road, Fleming, near other descendants of the Post family, including the Wordens. There, Allen and Frances raised their family, and resided until their deaths.

Another five generations have continued their relationship with Owasco Lake, picnicking on its shores; fishing, canoeing, and swimming in its waters.

Over the years and across the generations, Owasco Lake has been an integral part of the family. Stories abound about clearing the land, riding over the frozen lake in a cutter to reach Auburn in 1917, or attending a one room school house, otherwise known as “Bang Hall”, a name given to the school because of the rowdy behavior exhibited by its students, including tossing live 22 rounds into the wood stove.  Stories about trips to Ensenore, then a destination for recreation on Owasco Lake, and of wrestling a bear (among other tales) have been passed down from the maternal grandmother side of family – the Bishop, Tracy, Hanlon and Chapman families – who settled in Scipio Center.  Owasco Lake and its watershed have been part of the very fabric that has woven the lives of Christopher Post’s descendants, including those currently residing above Owasco Lake.

These deep roots set by the ancestors living and working on the west side of Owasco Lake have provided the current generation of Posts with a unique perspective on the lake.  They, too, must become its stewards.

The harmonious relationship that has existed between people and the water has become more perilous in the recent past.  The beauty that surrounds us, the water that helps sustain life, and the unique opportunity to enjoy a lake that has existed since the end of the last ice age, is in peril. Like nine generations of the Posts, many other families have enjoyed Owasco Lake and its surroundings; yet, may not be able to safeguard its future without an unwavering determination to find a solution that will protect its waters for recreation and drinking. In 2018 the challenge and threat come from blue green algae (cyanobacteria); a different threat may confront us in the future.  As an informed, vigilant, and engaged community we can face these challenges, and maintain the life of Owasco Lake, and its native species.  There is no alternative.

Miguelina Cuevas-Post is a member of the Owasco Watershed Lake Association. For more information about OWLA, please visit our website at www.owla.org.