Auburn Citizen Article: “If We Lose the Hemlocks”; Dana Hall, President of OWLA

If we lose the hemlocks, we lose the lake. As some of you may know from trees on or near where you live, the hemlock trees in this region are becoming sick. The cause is an invasive foreign insect called the Hemlock Woolly Adelgid (HWA).  This bug is tiny, about the size of an aphid, but in large numbers, they kill their hemlock host. This pest is spreading north throughout the east coast hemlock forests, and we now know that HWA is established in the hemlocks that guard the Owasco Lake watershed. 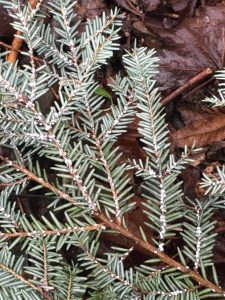 Hemlocks are a species native to both coasts of the more temperate parts of North America. Slow growing, green year around, undisturbed hemlocks grow closely together. Roots interlock. Soil is held in place. Snow is retained longer in their shade.  Streams are kept cool and streamflow is steadied. The presence of trout, amphibians, and lots of other aquatic life depends upon the shady canopy of hemlock branches overhead.  The cleanliness of our glacial lakes in turn depends upon hemlocks lining the edges and slopes of the cuts that drain from the highlands down to the lakes. Whether called gullies, ravines, gorges, or glens, these cuts are the natural boundary between farm fields and our natural water system. They are the wonders we often take for granted, glancing at quickly as we drive into valleys and cross bridges. In fact, we are so accustomed to hemlock forests that until recently, no inventory for the Owasco watershed existed of their remaining population and health.

Concern about the state of our watershed hemlocks began to grow in early 2020. Pictures of dense masses of dead hemlocks in Pennsylvania and Virginia were circulating. We learned that a survey of neighboring Skaneateles Lake watershed had found significant HWA infestations.  Worry heightened when the NYS Parks Service reported extensive HWA in the hemlocks within Fillmore Glen State Park near Moravia.

A campaign to estimate the number of remaining hemlocks and their health began in early summer 2020.  Across last summer and fall, a small group of local volunteers received hemlock and HWA assessment training from experts located at Cornell University’s Hemlock Initiative.  Please go to the excellent website at https://blogs.cornell.edu/nyshemlockinitiative/ to learn more about hemlocks, HWA, and natural insect predators that protect west coast hemlocks and hopefully soon will protect our east coast hemlocks as well.  Caroline (Carri) Marschner, especially deserves recognition and a sincere thank you.  Carri used Google Earth, her extensive experience, and County property tax records to prepare a set of recommended locations around the southern half of the Owasco Lake watershed. These locations were the ravines, gullies, gorges, and glens she surmised still contained hemlocks and whose continued good health are critical to keeping large quantities of sediment out of Owasco Lake. 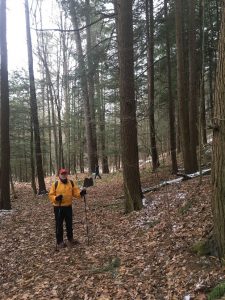 Volunteer Peter Rogers in the Hemlocks along Decker Creek

All of the suggested sites were on private property. Yours truly struggled to find valid phone numbers in this time of mobile phones. That search was successful with seventeen property owners. Each gave us permission to look at their hemlocks and, in some cases, hiked with us.  An app on our mobile phones helped assure that we stayed within property boundaries.  With deer hunting season completed and, as you may remember, a couple of mild, open weeks the first half of January, our small group of volunteers surveyed these locations in the hilly southern half of the Owasco lake watershed.  We usually worked in twos, for personal safety in the woods while keeping our covid separation.  The terrain was often challenging, especially the steep to very steep slopes leading down to streams and waterfalls flowing below.

We are pleased to report that we found large quantities of hemlocks along the upper edges of the gullies/ravines/gorges/glens and down the sloping sides. In some places we found, tall, stately primary hemlock forests we guessed to be several hundreds of years old.  That’s the good news.  The bad news is more than half of the forests we surveyed are infested with HWA, sometimes heavily infested.  The experts at Cornell tell us this spottiness is typical of the early stages of HWA moving into a region.

So, can anything be done to at least slow the onslaught?  The answer is yes.  The researchers at Cornell have found that HWA in the hemlocks of Oregon and Washington State are held in biological check by several types of insects, bugs who like to feed on the hemlock woolly adelgid. They have determined that importing those predators into the east coast hemlocks has no undesirable impact.  In the longer term (ten years or more), the plan is to build up the predator insects populations on our side of the continent to achieve a biological balance with the HWA.  In the nearer term however, our only defense is targeted application of insecticide, sprayed by qualified professionals on the lower trunk or injected into the tree trunk.  A single treatment lasts five or more years.  We hope that property owners with hemlocks critical to the protection of Owasco Lake as a public drinking water source will desire to make a private/public funding partnership with us.  The time for treatment is almost here; i.e., spring, when the trees are raising sap to promote their new and old growth.