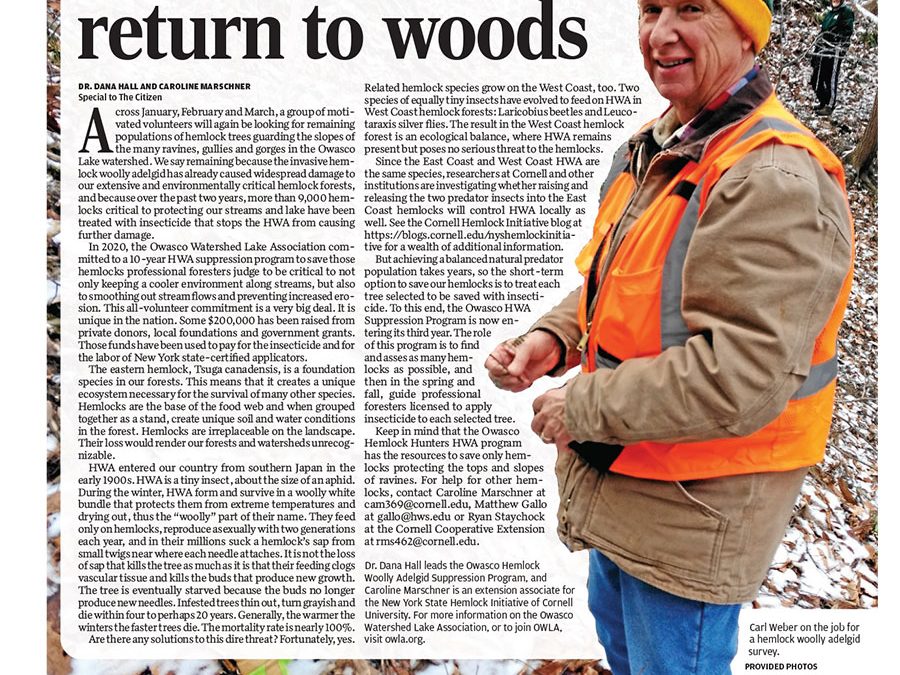 Across January, February and March, a group of motivated volunteers will again be looking for remaining populations of hemlock trees guarding the slopes of the many ravines, gullies and gorges in the Owasco Lake watershed. We say remaining because the invasive hemlock woolly adelgid has already caused widespread damage to our extensive and environmentally critical hemlock forests, and because over the past two years, more than 9,000 hemlocks critical to protecting our streams and lake have been treated with insecticide that stops the HWA from causing further damage.

In 2020, the Owasco Watershed Lake Association committed to a 10-year HWA suppression program to save those hemlocks professional foresters judge to be critical to not only keeping a cooler environment along streams, but also to smoothing out stream flows and preventing increased erosion. This all-volunteer commitment is a very big deal. It is unique in the nation. Some $200,000 has been raised from private donors, local foundations and government grants. Those funds have been used to pay for the insecticide and for the labor of New York state-certified applicators.

The eastern hemlock, Tsuga canadensis, is a foundation species in our forests. This means that it creates a unique ecosystem necessary for the survival of many other species. Hemlocks are the base of the food web and when grouped together as a stand, create unique soil and water conditions in the forest. Hemlocks are irreplaceable on the landscape. Their loss would render our forests and watersheds unrecognizable.

HWA entered our country from southern Japan in the early 1900s. HWA is a tiny insect, about the size of an aphid. During the winter, HWA form and survive in a woolly white bundle that protects them from extreme temperatures and drying out, thus the “woolly” part of their name. They feed only on hemlocks, reproduce asexually with two generations each year, and in their millions suck a hemlock’s sap from small twigs near where each needle attaches. It is not the loss of sap that kills the tree as much as it is that their feeding clogs vascular tissue and kills the buds that produce new growth. The tree is eventually starved because the buds no longer produce new needles. Infested trees thin out, turn grayish and die within four to perhaps 20 years. Generally, the warmer the winters the faster trees die. The mortality rate is nearly 100%.

Since the East Coast and West Coast HWA are the same species, researchers at Cornell and other institutions are investigating whether raising and releasing the two predator insects into the East Coast hemlocks will control HWA locally as well. See the Cornell Hemlock Initiative blog at https://blogs.cornell.edu/nyshemlockinitiative for a wealth of additional information.

But achieving a balanced natural predator population takes years, so the short-term option to save our hemlocks is to treat each tree selected to be saved with insecticide. To this end, the Owasco HWA Suppression Program is now entering its third year. The role of this program is to find and asses as many hemlocks as possible, and then in the spring and fall, guide professional foresters licensed to apply insecticide to each selected tree.

Keep in mind that the Owasco Hemlock Hunters HWA program has the resources to save only hemlocks protecting the tops and slopes of ravines. For help for other hemlocks, contact Caroline Marschner at cam369@cornell.edu, Matthew Gallo at gallo@hws.edu or Ryan Staychock at the Cornell Cooperative Extension at rms462@cornell.edu.